Climate System Governance is emerging as a critical public policy issue in the coming decades. Already become a hot topic under the heading of geoengineering –referring to a variety of methods to remove greenhouse gases from the atmosphere – we believe such approaches should not be embraced or rejected out of hand, but need to be considered within a larger perspective on the co-evolution of humanity and the biosphere. This trans-disciplinary subject embraces issues relating a wide range of disciplines including governance, business, economy, environment, technology, law and human rights. 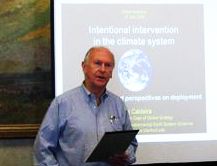 Report of the Symposium on Governance of Geo-engineering

Report on Survey of WAAS Fellows on Climate System Management